Something that is pretty key to history, is legend, lore and myth. A story is retold for several reasons.

The biggest, in my opinion is to teach a lesson. I have read tarot for close friends, family and more frequently the public for the last 15 years. But…. after working with a dear friend on my own healing journey, reconnecting with sacred geometry principals through online learning and doing a rare tarot reading for myself I realized that I was missing half of the story in my readings. How could I have missed so much? Now I have to say, never once in the hundreds, probably thousands of readings I have done over the years has anyone ever suggested I have been off base in any way. This really is the compelling part because I lack confidence in certain things. If people ask me for it, I’m going to give it. I’m not forcing anything on anyone with this and I KNOW it makes some people uncomfortable. This is my time to talk about it, to learn about it with you and do my part of the work with the big dogs taking notice (ahem spirit!).

It’s a pretty wild realization to me, because I have always tried to read very earnestly and purely to the deck I’ve always read on. My deck is all marked up and been through everything at this point, but its MY deck. It was the first given to me, and it’s pretty special in fact, It’s priceless – not something I believe you can just get at a bookstore.

In art school I learned a super awesome word – Iconography.

Iconography is history being told through pictures. It’s symbols and messages through tiny little secret or not so secret pictorial references. It’s EVERYWHERE! Look closely at a dollar bill, the markings on moldings of buildings, especially in other countries.

Through the years, I’ve come to know what certain things mean when I see them in pattern over a spread. Pentacles for example suggest manifestation, ideas coming to fruition, a craftworker, creation. When I see a lot of them in a particular persons spread, it suggests  archetypes for them – that’s how I read. It’s a channel yes, but more than anything, it’s a knowledge set.

The pentacle itself has a LONG rapsheet. Depending on who you ask – it has a thousand meanings.

For my purposes it can mean the following – the 5 wounds of christ, a symbol of ancient geometry and the golden ratio, an astrological plot, and perhaps even a moniker of masonic lineages.  (which looks to pact making, secret fraternity etc)

How many different stories are tied to the aforementioned? Well, alot. As someone claiming to offer perspective through the cards via my voice, I need to know these stories.

Since it’s fall and I was supposed to spend tomorrow night reading tarot with a full house, and have now come down with a virus – I will do the sacred work and complete the assignment.

Today’s story is about Demeter – tied to the III The Empress card of the Major Arcana in Tarot.  There are 28 Major Arcana in a Waite Deck of Tarot. The more of these you get, the bolder you are by fate. I picked this one because she represents the iconography to the max here. She is the mythic daughter of Zeus, and ruler of nature and the seasons. She had a beautiful daughter Persephone. Hades, ruler of the underworld tricked her into eating his fruit, the pomegranate because he was in love with her. 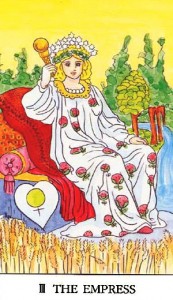 Demeter suffers a huge loss losing her daughter like this. She grieved hard searching for her. Everything died out. Zeus couldnt let the lushness of the land continue to die off so he sent Hermes to make an agreement with Hades. For 1 third of the year she will live with him in the underworld, learning it’s secrets and will emerge to be with her mother Demeter for the rest. This marks the changing of the seasons. In spring, all is renewed as Persephone returns to her mother. Then in preparation for her descension, all once again is claimed by her despair, marking Autumn.

There are SO many elements to this card – aside from its basic principals. Her robe which is laced with the pomegranate. The pomegranate has meanings across all cultural borders. It symbolizes the blood of adonis, a powerful healing fruit, abundance for its many seeds, the fruit of the underworld,  a symbol of prosperity, fertility, tradition…. I could go on.

This is why we have wiki.

The backdrop is nature with a flowing waterfall, there’s a heart with ancient symbols relating to man and woman, there’s a field of golden wheat, a starry crown….

Does it become clear then what this card could suggest to someone if being read in the vain of whats “surrounding you”?

It would suggest you are surrounding by nurturing forces, by perhaps a lesson through an air of grief, it would suggest the prospect of a fertile idea or self, or even relationship.

I haven’t produced much art for the last few weeks to be honest. I’ve been lost in books. One of my dear teachers Gemini Brett delivers his messages with stories of the ancients laced up with events of today. It’s brilliant in the ways that you can send a message by more than 1 means with words.

This is my time to channel the myths and history really through my readings. Gathering data from the iconography, the cards indications I previously held and the placement in the spread.

I hope this satiates my friends who were expecting readings Saturday. We’ll reschedule!!!

I’d love to schedule a reading in person with you too.