Alright folkers this one’s for you. 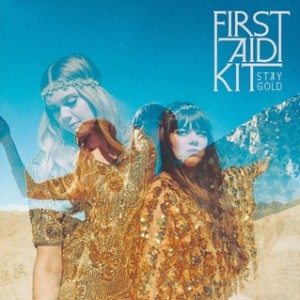 First Aid Kits third full album, “Stay Gold”, is a folk filled, haunting journey that will leave you happily nostalgic.  This is their first album with Columbia Records and it shows a lot of potential.  It’s full of melodic harmonies, matter of fact lyrics and it has a 13 piece orchestra to boot.

Swedish sisters Johanna and Klara Söderberg began composing at a very young age.  They released their first home recorded single “tangerine” and quickly began getting airplay in Sweden.  They were eventually noticed by Jack White who invited them to record a single in his studio which got the ball rolling for the American circuit.  They became friends with Conner Oberst who brought them on stage to collaborate with Bright Eyes which led them to Mike Mogis of Saddle Creek Records. He produced their second album “The Lions Roar” which hit the Billboard Charts but never got much recognition aside from the single “EmmyLou”.

Third album, “Stay Gold”, is an eclectic mix that takes you on an emotional rollercoaster of sound.  There are a lot of parallels in with this album and the Bright Eyes album “First Day of My Life”.  It’s obvious that Oberst has influenced these sisters in all the right ways.  The album starts with “My silver lining” which is about moving forward and being empowered and it ends with “A long time ago” which makes you stop, hang your head, and relive heart break. This is the kind of album you blast with the windows down on a pretty day when you need to sing your guts out.

I’m not certain these girls have honed in on their own personal sound but I foresee good things for them in the folk market and as long as they continue to grow their sound I would imagine they will have a long and lucrative career.

You can catch them on tour in the U.S. this fall or at: 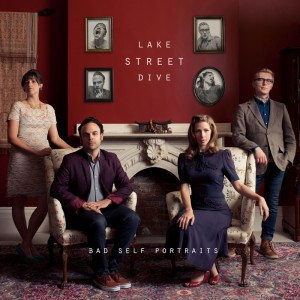 Hey ya’ll!!!  I’m so excited to join the BethKaya team and work along side some of the most fabulous people ever.When I first signed on I decided that I wanted my mission to be to introduce people to new music I love.  In my search for the next “big thing” I managed to stumble upon Lake Street Dive. Lake Street Dive’s album “Bad Self Portraits” is quickly becoming my new favorite. This eclectic album brings you from bobby socks and poodle skirts into a smoke filled speak easy in a matter of minutes.  I’m kicking myself for not finding them earlier.

It has been a long time since I have come across an album where I not only like all the songs but I immediately fell in love.  The title track and first single, “Bad Self Portraits” instantly has you nodding your head where as  “Just Ask” has soul and harmonies that makes you stop everything and listen.The ups and downs of the song “Seventeen” make you go through the same mood swings every hesitant person feels when meeting a new love interest.  The versatility of the album makes it a quick, easy listen that you are sad to hear end.

Lake Street Dive is the brain child of trumpet/guitar player Mike Olson.  Their lead singer, Rachel Price has a powerhouse  voice that sounds as if Bonnie Raitt, Etta James, and Amy Winehouse had a love child.  Her voice sets the tone for the entire album with smokey overtones and powerful runs.  I hate to scream girl power (who am I kidding I love it) but upright bassist, Bridget Kearney, holds her own.  By the 3rd track, “Better Than”, you really start to feel the presence of the bass which helps aide in the jazz bar feel this album conveys.  And lets be honest, a female playing the upright is just plain hot.  With drummer Mike Calabrese keeping the beat they make a perfect collaboration that brings you to a  new sense of nostalgia. With pop cultures recent love for the post prohibition era, I see big things coming from this big sounding Quartet.  So make yourself a manhattan, sit back and let Lake Street Dive take you back to when booze was an art form and music came from the soul.

Go to www.lakestreetdive.com check out local tour dates and learn more about the band